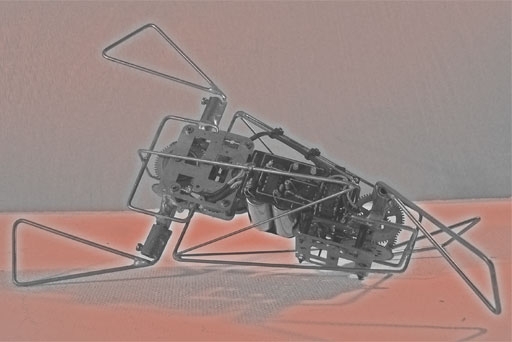 The XT-1 is a robot that moves itself by tumbling.
It has two motors with their axes placed diametrically.
Each motor drives 2 "legs" but in
opposite direction. The motors don't oscillate,
but turn continuously, until one of the legs is
blocked by an obstacle,in which case that motor
reverses, and so does the robot.
Note that when both motors reverse at the same time
the robot keeps moving in the same direction!

The controller for this robot consists of 2
identical circuits, one for each motor, which
share a common powersupply; 4 AA-batteries.

The circuit for automatic reversal is pretty
simple, but may need some tuning for other
motors.
Experiment with resistor-values, and number
of 74HC240-gates for the drivers, you need
more gates per motor then it would normally
take to drive the same motor. 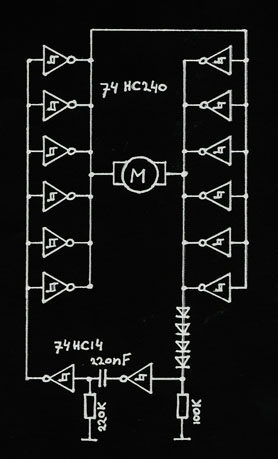 With it's legs functioning as actuators as well
as sensors, it is pretty capable tumbling through
it's environment and handling obstacles.
Despite the fact that the 2 motors/controlcircuits
are independent the robot has a tendency to
converge to 1 of 2 distinct gaits:
One where the 2 sets of legs are in phase
(both sets of legs pointing outwards at the same
time)
Another where the 2 sets of legs are out of phase
(one set pointing outwards, the other inwards)
The second one being the most energy-efficient.