The solar-balls move themselves around by shifting
the weight of the gearbox, motor, electronics etc.,
which are located largely in the lower part of the ball.
The balls are made of transparent plastic spheres
which consists of two halves that click together.
The gearbox is connected to a horizontal axle which,
in turn is connected to the ball.
When the ball runs into an obstacle and the motor
turns, the weight shifts forward and when there is
enough light, it goes all the way around making the
ball roll away from the obstacle.

The gearmotors are made of parts of analog wind-up
alarmclocks, the small dc-motors come from
casetteplayers, cd-romdrives, etc. The motor is
soldered to the brass of the alarmclock. It takes
some practice, but once you get the hang of it, this
results in a good strong gearmotor that can be used
for all kinds of robotics projects, and very cheap.

One solarball on its own may be a bit boring but when
you put several of them together in a confined space,
it is quite interesting to watch them move around and
interact. One "emerging" property they exhibit is, for
instance, a tendency to dance around each other when
they meet.
To furher enhance interaction, most of the solarballs
have an impact-sensor which triggers the solar-engine
but only when the voltage in the storage-capacitor is
less than 0.6 volts below the normal triggervoltage of
the solar-engine. So when one ball bumps into another
ball, the latter is triggered, but only if it is sufficiently
charged to make the motor turn. Note that this only
works when the storage-capacitor is big enough.

The impactsensor can be made of the spring of an
alarmclock, or any other suitable spring.

Below you'll find some of the different "species" of
solarballs that were built so far. 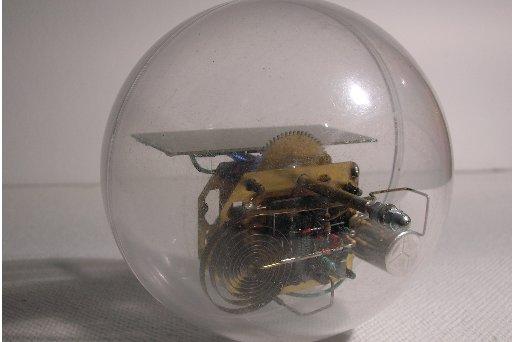 The diameter is 12 centimetres. 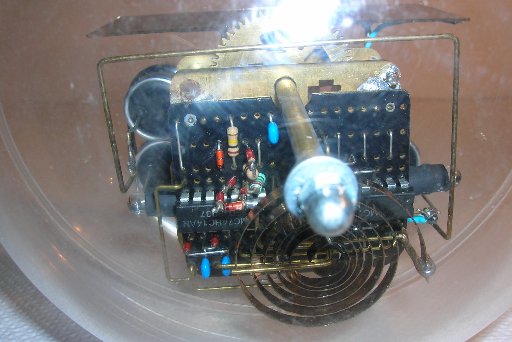 The 2W-SB-1 is a phototropic solarball, it has two
lightsensors. When the solarengine triggers, it moves
in the direction of the light.
To prevent unproductive oscillation when the difference
in perceived lightlevels is small, the lightsensors are
connected to two mutual inhibiting "neurons", to make
sure that once a direction is chosen, the ball keeps
rolling in that direction, until the next time the
solarengine is triggered.
The diameter of this ball is 14 centimetres. 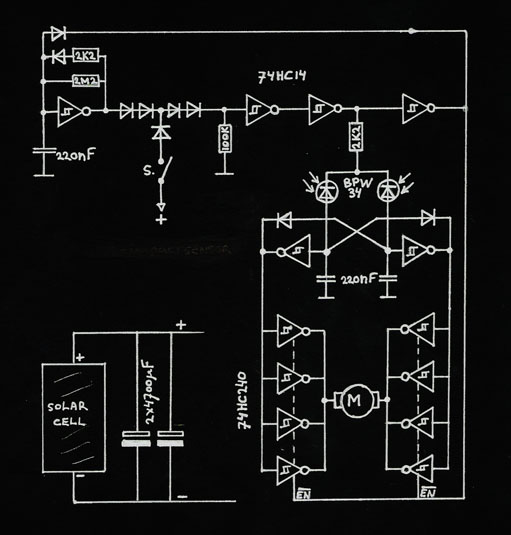 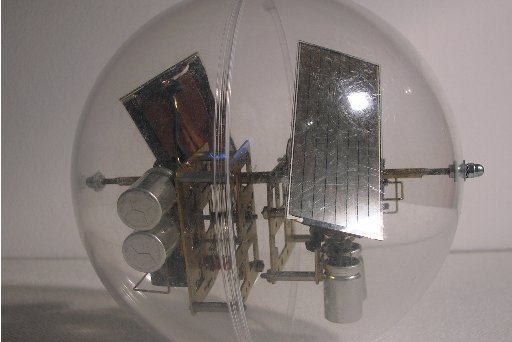 This one consists of two sets of gearmotor, solarcell,
solar-engine on one axle. The solar cells are placed
facing outwards, so when there is more light on the left,
the solar-engine on the left is triggered, and vice-versa.
The interaction of the two weights within the ball makes
its behaviour quite unpredictable, a small displacement
of one of the weights can make it move forward,
backward or sideways, depending on the position of the
other weight.
The diameter of the ball is 16 centimetres. 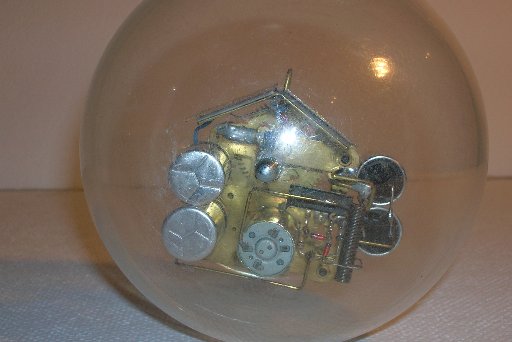 The SB-0.5 has a solar-engine that is a little different,
it does not trigger itself, but keeps on charging until it
is triggered by another ball through its impact-sensor,
but only when there is enough charge in the capacitors.
Its diameter is 12 centimetres. 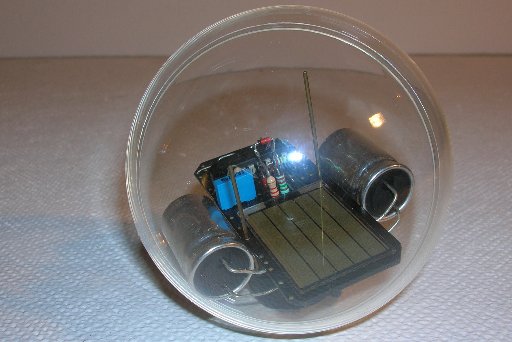 This one has no gearmotor, it is basically a symet placed
in a small sphere, diameter 8 centimetres.